The impact of particles such as raindrops and hailstones on the leading edge of wind turbine blades causes progressive material damage. This may lead to a loss of material from the solid surface. The resulting surface roughness reduces the aerodynamic performance of the wind turbines significantly. The impact on the annual energy production may range from 5% to 25%.

To maintain acceptable aerodynamic performance, wind turbine and wind farm owners need to repair blades several times during the lifetime of the project. This results in significant operation and maintenance costs and additional loss of energy production due to downtime.

Harsh environmental conditions in combination with high blade tip speeds result in extremely large and intense impact forces between droplets and blade surface. The blade tip speed of modern offshore wind turbine can exceed up to 320 kilometres per hour. Under these conditions, the tip region of wind turbine blades perceives a seemingly harmless rainfall like a true hail of bullets! With the current trend of larger and larger blades with higher tip speeds, it is expected that damage will become even more severe.

The main objective of WINDCORE is to develop wind turbine control strategies to limit the damage of the blades caused by colliding particles. More specifically, the project explores the strategy of controlling the rotor speed during the impact of rain droplets.

Given the fact that wind turbine blades erosion occurs predominantly during bad weather, the idea is to reduce damage by lowering the rotor speed when it is raining or hailing heavily. In the end, even in the harshest offshore environments it is fortunate that these kind of severe damages happens only during a very small fraction of the turbine lifetime. Therefore, reducing the rotor speed during heavy rain will result in a significant extension of blade lifetime while only a small part of the electricity production is lost.

WINDCORE will determine the optimal speed to operate the rotor within several given rain classes. Through aerodynamical computer simulations, modelling and laboratory testing of the leading edge erosion process and characterization of the critical precipitation condition the optimal speed during harsh conditions will be related to specific offshore environment conditions. The project aims to find an optimal balance between the lower operational and maintenance costs and the shorter downtime due to fewer repairs needed on the one hand, and the lower electricity production as a result of the reduction of the rotor speed on the other hand.

The project will develop optimized rotor control strategies, based on reducing the rotor speed during (heavy) precipitations. In this way the lifetime of wind turbine blades will be significantly extended. Wind turbine manufacturers and wind farm operators may use this information to operate wind turbine rotors to make them live longer and less damaged.

The project develops a comprehensive wind turbine control strategy that can be applied to establish the optimal rotor speed given local precipitation conditions. The knowledge and procedure developed within this project will be ready for large scale testing and in-field validation. As already discussed with the consortium partners, field tests will be a natural continuation of this project, and it will be the subject of a future proposal.

This project is supported by the Netherlands Enterprise Agency and TKI Wind op Zee. 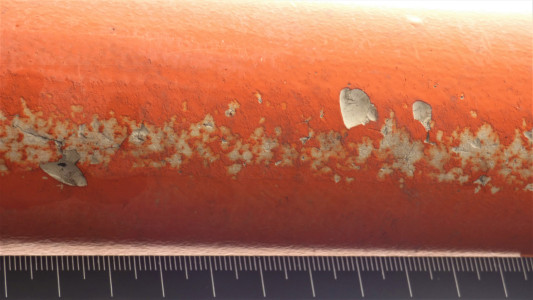 Assessment of waves, displacement and stress in rotor blades