The monopile is the most used type of foundation for offshore wind turbines and is expected to remain the preferred option for the foreseeable future. The dominant method for driving monopiles into the seabed is hydraulic impact piling, also known as hammering. However, this technique has the drawbacks of high noise emissions during pile driving and high loads on the monopiles. That is why there is a need for a more environmentally friendly pile driving technique.

To this end, the GROW consortium is developing the Gentle Driving of Piles (GDP) driving technology. This method aims to make the pile installation process more efficient and environmentally friendly. The installation method is based on the simultaneous application of low-frequency vertical and high-frequency torsional vibration on the monopile. This method is called “gentle” for its envisaged capability to reduce the driving loads and the noise, which is harmful to the environment.

The development of the GDP technology comprises five projects with the aim of having GDP installation technology commercially available offshore by 2025. In the first GDP project, the technique was successfully demonstrated for application in sandy soil. In the three following projects SIMOX, GDP1.2 and GDP2.0 – which can partly be carried out in parallel – knowledge will be gathered to improve the offshore technology. In the last project GDP3.0, the GDP technique will be demonstrated offshore.

With this GDP1.2 project, we aim to achieve three objectives. First, we are conducting two experimental campaigns; one at a lab scale (1:100) and one at a medium scale (1:10). In the laboratory-scale experiments, we will investigate the effect of frequency and amplitude on the shaker power consumption under various controlled soil conditions, including clay. In addition, we investigate possible ways to automate the selection of the optimal drive frequency and amplitude. In the mid-scale field tests, we will extend the tests performed in the first GDP project by demonstrating the capabilities of the GDP shaker in dominant clay soil conditions more representative of the North Sea.

The main results of this project will be a solid and comprehensive proof-of-concept of the GDP technique to demonstrate that the pile penetration rate also remains uncompromised for clay containing soil. By independent control of the amplitudes and frequencies of both the vertical and torsional excitations, we will demonstrate a lower power consumption of the GDP shaker at a lab scale. The project will also provide valuable data to further calibrate and validate the numerical models currently being developed in the first GDP project.

We will use the results of this project, together with the insights from the first GDP project and the two other projects SIMOX and GDP2.0, to carry out a demonstration campaign for the GDP technique. In GDP3.0 we will install a full-scale monopile offshore with a shaker designed with (improved) new technology. The results will prove to the industry, that GDP is a safe, low-noise and cost-effective technique for installing large monopiles. After this, the technique can be applied commercially in the North Sea and elsewhere. 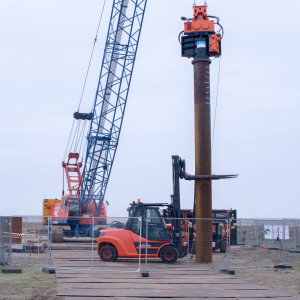 This project is supported by the Netherlands Enterprise Agency (RVO) and TKI Wind op Zee.