The development of a seawater-hydraulic drive train. The drive train, consisting of a high-torque, low-RPM, multi-MW pump as well as a hydraulic support system, is an essential part of the innovative hydraulic multi-MW class wind turbine which is being developed by Delft Offshore Turbine (DOT) company.

Offshore wind turbines are becoming larger in size and power, resulting in lower speed and higher torque. Higher loads primarily affect the gearbox. It will lead to a significant increase in drive train size and mass, requiring larger and more expensive support structures.

A possible solution to reduce the mass of the nacelle is to use hydraulic drive trains. Such trains have a high power to mass ratio, allowing for a much smaller nacelle and support structure mass for the same power per turbine.

Since 2015, Delft Offshore Turbine (DOT) is developing a novel hydraulic concept, which only requires a single water pump directly connected to the turbine rotor in the nacelle. The pumped water is transported to a Pelton turbine to generate electricity. The Pelton turbine is located at a central location where the power production of multiple turbines is combined. Earlier research and testing already demonstrated the feasibility of water hydraulic power trains at smaller scale.

At the heart of the DOT concept, a low speed-high torque multi-MW seawater pump is required to replace the gearbox and generator of a regular wind turbine. Pumps up to 2 MW exists for oil-based systems. However, due to lack of demand, a suitable multi-MW seawater pump does not yet exist. This DOT3000 PTS project aims to develop such pump in‐house.

In this project, we develop an operational hydraulic drive train system and an efficient auxiliary hydraulic support system to provide water to the main pump and to generate power from the pressurised outlet flow. The challenge is to maximize the overall efficiency and to reduce the mass of the nacelle compared to conventional wind turbines. We will optimise the design and subsequently test the system thoroughly in a purpose-built test bench to evaluate performance and to gather information for future optimization of the individual components and the system as a whole.

The project will result in a thoroughly tested low-speed, high-torque pump with a nominal operating pressure of 420 bars and with a displacement of approximately 400 litres per revolution. For testing the complete power train system, a test bench will be designed, constructed and delivered. The pump will be complemented by a newly designed hydraulic support system to supply the needed feed water.

The DOT hydraulic drive train turbine concept aims to reduce the cost of an offshore wind turbine by 25-50%. This is achieved not only through a reduction in top-mass but also through the replacement of several maintenance critical components by more reliable hydraulic components. 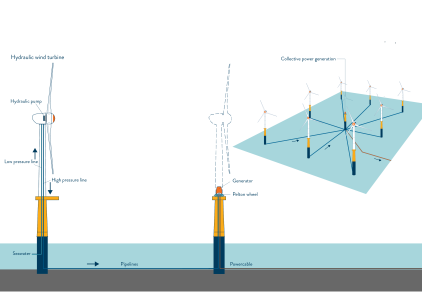